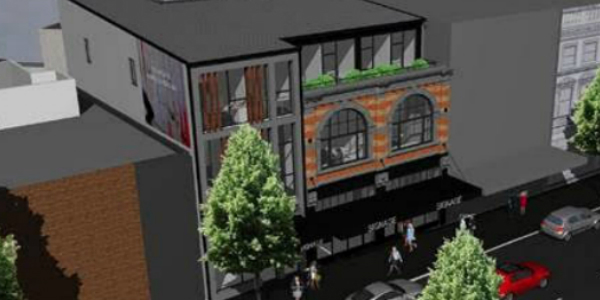 In a city that has lost so much building heritage since the earthquakes, an innovative central Christchurch project is refurbishing a historic 120-year-old façade while creating a thoroughly modern and multi-purpose structure behind and around it.

A new three-level building proposed at 199-201 High Street in Christchurch consists of retail and commercial premises on the ground floor and offices on the upper floors. The $6 million project will provide new life in the city, with a cafe and shops at street level, and offices upstairs.

Shaun Stockman, Managing Director of the company behind the redevelopment, Stockman Group – which has previously featured in White Associates newsletters thanks to its excellent work on the nearby Billens Building – says that the existing heritage face at 201 High Street is being strengthened and retained as part of the northern elevation of the new building.

“The double-storey brick facade was built in the Victorian Free Style, with two bays at first-floor level, and arched windows flanked by pilasters adorned with relief work. Work to restore the facade, which is tied to the new structure, has involved renovating the facade’s bricks and stonework, and all leadlight windows repaired.”

White Associates again provided Stockman Group with bank funding representation and an initial due diligence review. Darin Bayer says that a key factor in the project’s success has been early contractor involvement.

“Things that have really made a difference on this project’s potential really have been early contractor engagement and the strong relationship between the borrower and contractor. Superb up-front planning from main contractor Canform Structures Limited, as well as the construction team’s attention to detail and uncompromising pursuit of quality, will lead to an exceptional outcome here, even as some of the challenges have been mighty, with 49-tonne beams cast on site and craned into place.”

“Superb up-front planning from the contractor, as well as their attention to detail and uncompromising pursuit of quality, will lead to an exceptional outcome here.”

Bayer says that the project is pushing along well, with the concrete floor and foundations complete, and ground floor precast panels installed. The project is due for on-target completion in early 2020.