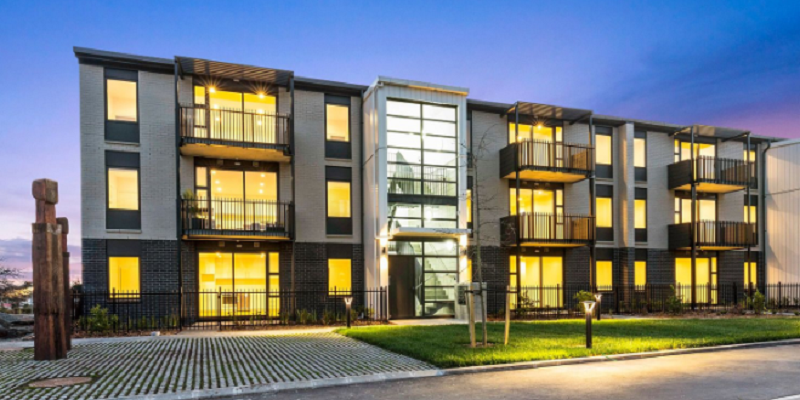 At a time when the Government’s KiwiBuild housing programme has come under sharp public criticism, and has even seen the reshuffle of the minister leading it, one Auckland developer is defying the critics with the delivery of quality homes on a budget through the initiative.

NZ Living has already built and sold 10 KiwiBuild homes to buyers as part of its Mason Apartment Development in Otahuhu (pictured above), with more in the pipeline in Onehunga and Northcote.

NZ Living, which is led by Waiheke Island-based couple Shane and Anna Brealey, has shown it can be profitable thanks to a successful business model built on effective people management and a lean system of delivery, inspired by the Japanese Kaizen approach to continuous improvement.

Shane Brealey says as both builder and funder, with one architect and one engineer on the team, NZ Living doesn’t tender or negotiate work. Instead the company takes a partnership model, which has seen it retain 90% of the team from one project to the next.

“We don’t deal with retentions and argue nickel and dimes with our contractors and subbies, but we do expect them to buy into the continuous improvement idea. This allows us to capture learnings and constantly refine our designs and building methodologies to the point we use half the amount of architectural drawings now from when we first started. It’s not about sacrificing on quality of materials or design, it’s just about a more efficient way of working.”

Graham White says that this meant that White Associates did a cost plan that was much more than a budget, and enabled NZ Living to go to the subcontractor market to validate the costs.

“When all the subbie pricing was in,” says Graham, “we reviewed the prices to ensure they stacked up. This is a great approach: not only did it save time, but Shane and Anna got the team they wanted, which is a huge advantage.”

With this streamlined, production-line approach to development, NZ Living has been able to significantly reduce costs, by Brealey’s estimate, of 50% less per square metre to build compared to a standard apartment per square metre cost. To highlight this on its last project, the development not only came in on budget but there was no need to tap into the contingency either.

Brealey says White Associates has played an important supporting role in this approach.

“Konrad and Graham were involved at the very start of our journey in validating our early designs and cost estimates, which led to ongoing support in the form of monthly reviews of our financials. What’s also been very beneficial is the fact White Associates also acts as the QS with our banks. The resulting levels of cooperation built on high levels of trust and transparency, results in an extremely efficient drawdown process for us.”

Graham White says that White Associates has enjoyed working with NZ Living over the last two years. “We went through and did a cost plan for NZ Living, reviewed the feasibility, represented the bank funding the development, and then reviewed all subcontract pricing. They are an impressive outfit – very lean and hands-on: a partnership that delivers.”

With a proven delivery formula and a supportive financing model, Brealey says he is looking forward to growing NZ Living’s scale, and building more homes as part of the KiwiBuild Programme in the future. “All we need now is for the Government to up its game with communication to the development market and relax its screening process so we can get more players helping to deliver the thousands of homes needed.”

White adds that in his view, now there has been a Cabinet reshuffle, it is pretty likely that KiwiBuild as a brand will disappear, but even under some other brand the initiative will still continue. “We still need housing at this price point,” he says. “The Government needs to support the initiative and can even do more to make more land available for development. In short, we think that the Government can do more to assist developers, and KiwiBuild – or whatever it becomes – has a role to play in helping to underwrite purchasers, free up the supply of land, and enable the intensification we need. “After all, the huge advantage of KiwiBuild to the development sector is the speed with which you can start construction, not needing to have pre-sold such a high percentage of unit. Essentially it takes the sales period down from eight months to eight hours.”