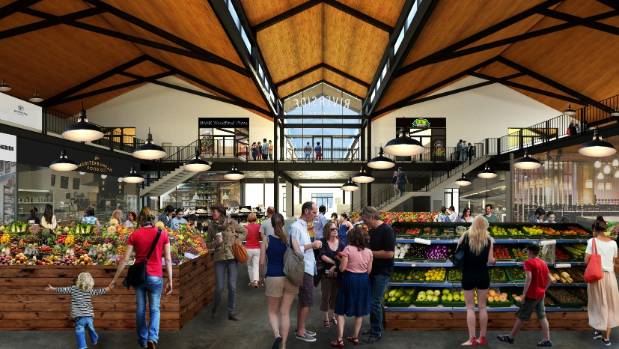 An exciting new project is underway that’s set to attract thousands of people to the western end of Christchurch’s retail precinct.

Riverside Farmers’ Market will be a high-end retail development on the site of the Re:Start Mall -bordered by Cashel and Lichfield streets and Oxford Terrace. It will include a farmers’ market, restaurants, food stalls and retail shops.

The development by Peebles Group and partners Kris Inglis and Mike Perkasky is going to become a hub for events in the city as farmers’ markets in central business districts around the world continue to grow in popularity as people turn to healthy eating of local produce.

Investor Richard Peebles says he’s wanted to do a farmers’ market in the city for a long time but finding the right location had been difficult until the Re:Start site and surrounding land became available through Crown company Ōtākaro.

“The way I see it, there is nothing else in the city that’ll attract people like a market will. The footfall produced by a market is unrivalled, which means that surrounding businesses also win – and nothing attracts people like people.

“The markets also offer the ability for small businesses and entrepreneurs to essentially incubate their businesses – barriers to entry are low,”

A buzzing attraction to light up Christchurch

The farmers’ market will house around 30 ‘ready to eat’ vendors alongside around 40 stalls offering local produce such as fresh fruit and vegetables, baked goods and flowers.

The combined development will also include 15 high-end fashion and retail tenancies, four mezzanine floor hospitality opportunities and an open roof top bar. There will also be a roof top outdoor area and a large internal seating mezzanine floor above the market.  Outdoor seating will spill onto Oxford Terrace, which is being paved and pedestrianised, to create a lively and engaging destination for locals and tourists alike.

White Associates has been providing bank funding representation for the Peebles Group for this development. White Associates Director Darin Bayer says he’s thrilled to be involved in such an exciting and transformational project.

“This development will be testament to what can be achieved from incredible vision, thorough planning and a strong commitment to providing the Christchurch community with an outstanding new precinct,” says Darin speaking of the Peebles Group.

The development is going to be great news for Christchurch and the developer Richard Peebles says it’s going to be a hub for events in the city. A riverside area will host weekend arts markets and events such as night-time festivals.

Richard says there will be around 18,000 people working within a small radius of the market, meaning it will become a staple morning, lunch and dinner time destination and the place to get fresh produce and specialty meats for dinner on the way home.

Peebles Group has been involved in several other central city projects, such as the McKenzie and Willis development on High Street and a three storey build on the Hereford end of The Terrace that will house bars on the ground and first floor and office space at the top.

“It’s great to be part of the building momentum.  The city is really beginning to take shape and the next 12-18 months are going to be fundamental to the ongoing transformation. The CBD is going to be far more densely populated compared to pre-quake, which is going to make everything a lot more lively and active,” says Richard.

Construction is now underway is expected to be completed towards the end of this year.